My recent addition to the bicycle stall is a green LittleBig balance/pedal convertible biped. 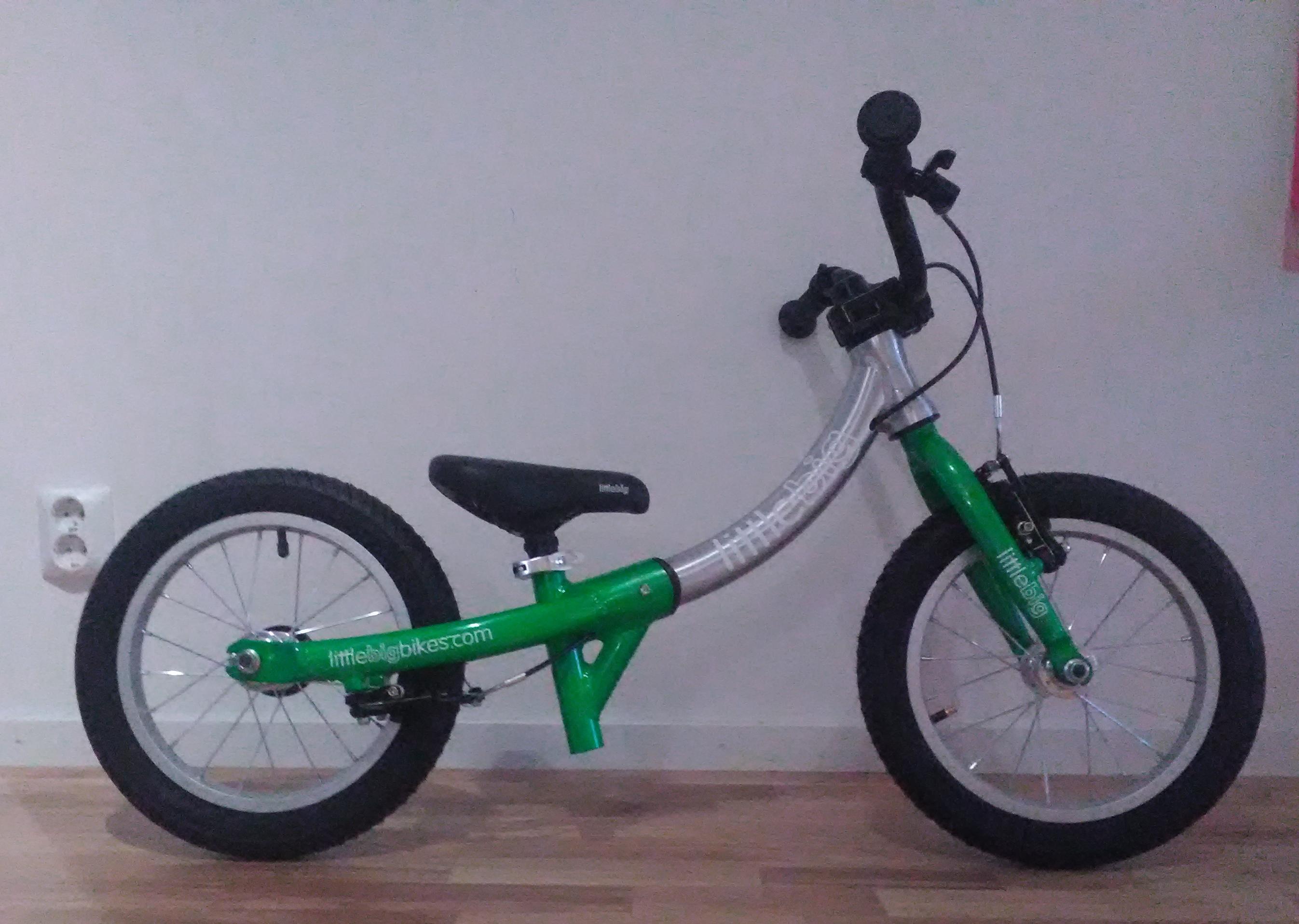 The longest side of the box is 90 cm, its weight is 9 kg. Inside the box, the frame is partially wrapped with Styrofoam sheets, and handlebar and front wheel are tied to it with zip-ties. The crankset part is in its own compartment, and user manual and a chain are also packed separately inside.

The bike comes partially assembled. A parent has to install everything at the front: wheel, handlebars, close brakes, — and then pump the tires (or at least check the pressure as they were somewhat inflated enough to be useful out of the box).

Assembling instructions found in the box are very good. Torque values for key fasteners are provided. They even mention such maintenance procedures as periodic overhaul of bearings in the headset and hubs. The package included tools required to complete the assembling process, but they were very basic and I still used my own tools, such as a torque wrench.

Quality of components is not premium. But it is not entirely crap either, but rather matches expectations for the given bike price point. No carbon anywhere, luckily. The resulting bike is still unproportionally heavy: it weighs around 6 kg in all configurations. That is how much the lightest (and most expensive, to be fair) road bikes for grown-ups weigh. So basically both a rider of 75 kg and one barely tipping 15 kg have to operate similarly weighing bicycles.

The front wheel was not exactly true, and it took me several futile attempts to tune front V-brakes to not touch the rim. then I finally decided to go fetch the spoke key and to true the wheel. Arms of V-brakes have some plastic parts to press the returning springs, which does not sound like a reliable solution. As it is usual with them, it is hard to fine-tune such brakes. In this case of small levers it turned out to be nontrivial to configure the front brake without the levers to bottom out against the grip.

Because wheels have bolt-on through axles, I had some troubles aligning them when installing the front wheel. Torquing an axle nut while the bike hangs in a bike stand tends to affect the axle’s position in dropouts. Pressing the wheel against the floor helped to center it properly until both nuts were screwed to the specified torque.

V-brakes are used front and back. Calipers and pads are pretty standard, while levers are smaller than usual. Levers have reach adjustment bolts.

Out of the box, the left brake lever controls the rear brake, and the right one actuates the front one. This is opposite to what is usually found on adult bikes (some sort of a stupid standard requirement?). This fact is documented on the website and in the included manual, so I was prepared to swap them. Additional tools are required to do so. One has to cut existing end caps from cables, draw brake cables out from housings, swap connections of housings to brake levers, reinsert cables and clamp new/reused end caps. The rear brake housing runs partially inside the frame to allow easier rotation of the frame’s halves when one converts the bike between sizes.

Because the seatpost tube protrudes both up and down the frame, it looks like it would be possible to catch an obstacle with lower part of the tube in the “little” balance configuration when a rider would decide to climb a curb. It hasn’t happened yet, but to prevent any scratches to the lowest area which at some point in future will become the highest part of the frame, I wrapped it with a bit of old inner tube, held by a zip-tie.

I saved the geometry numbers found on the vendor page and augmented it with my own measurements here:

My wheelbase measurements gave me 715 mm in shortest wheel position.