The whole premise of the land cover import for Sweden [1] bases on the idea to take the raster map of land cover and to covert it into the OSM format. This results in new map features that are essentially closed (multi)polygons and tags. These new features are then integrated into the existing database with old features during the conflation step.

This post is about the first steps of this process, everything around the vectorization of raster.

It is hard to describe all the programmatic and manual actions needed to convert the input data. A lot of it is described in the OSM wiki page [1]. The best way to learn the details is to look into the source code of scripts written to achieve the goal. However, the general data processing flow will definitely contain most of the following phases, and maybe something more. The order of certain steps, especially filtering phases, can be different. Coordinate system transformations are only needed if the input data is not in the WGS 84 format used by the OSM database. It can also be done later in the process.

To recap on relations between raster and vector layers of new and existing data to be conflated with each other.

It proved difficult to automatically or even manually make sure that land use (multi)polygons from existing OSM-data and new data to be imported do not conflict with each other when they both are represented as vector outlines. Even more complex question is how to decide what to do with two conflicting ways. Should one delete one of them? Replace one with another? Merge them? Create a common border between them?

A simpler approach was developed to address conflicts at the stage when import data can be easily masked, i.e. when it is represented by raster pixels. The idea behind this approach that we can generate a second raster image of identical size and resolution for the country. The source for this raster mask image is existing OSM land cover information. For example, a vector way for already mapped forest will be turned into a group of non-zero pixels. The vectorizing software then uses this mask to prevent new vector ways to be created from the import data raster. It would look as if no data for those areas is available. As a result, vectors generated from masked raster never enter “forbidden” areas where previously mapped OSM-data is known to be present.

By restricting new data to be created only for not yet mapped areas we reduce the problem of finding intersections between multipolygons to the problem of aligning borders between new and old polygons.

As import data is masked at the very first stage when it is in raster form, it is expected that areas “touching” (sharing common border) with pre-mapped land cover data will require careful examination and merging of individual way borders. All cases of overlapping of identical land uses should be fixed.

A major issue that everyone is wary of is that new features generated from the import data will be incorrectly tagged. The issue here is that the OSM tagging approach does not stimulate using fixed predetermined number of data classes for land cover, meanwhile the majority of raster sources by definition provide a limited number of pixel values and associated landuse classes. Mapping the former to the latter is considered by some to be the most unreliable task.

Sure, there were situations when a misclassification of a feature was found during cross-inspection of new data, old data and aerial imagery. But they were really rare compared to numerous other problems to deal with. The most common (but still rare) situation of this class was wrong marking of “bushes” under a power line as “forest”.

The real problem was in the need to adjust the tag correspondence map from input raster values to resulting OSM tags. That is, in different regions of the country the same pixel value might correspond to different OSM tags.

The most problematic class of land cover to tag correctly turned out to be “grass”. The same original raster pixel value may correspond to different concepts in OSM, ranging from a golf course, through cultivated grass to wild or cultivated meadow and even heathland. Because of that, manual inspection of all areas tagged as “grass” was constantly needed.

Often more nodes that a human would place are used on a way. Original data may have a node every 10 meters, additionally using Chaiken [2] filter to smooth 90-degrees in vector data can create as many nodes. See an example: 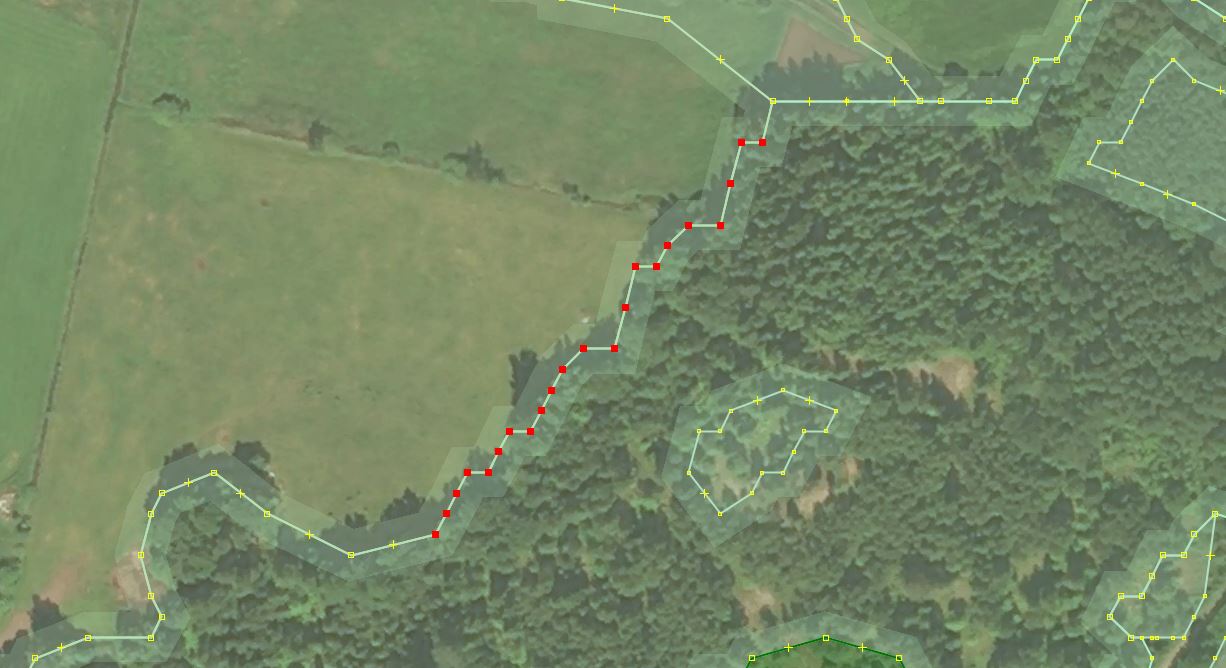 A manual solution is to delete undesired nodes, and/or use Simplify way [3] tool to do so.

An automatic solution would be to apply Douglas-Peucker filter to ways of the import file. The issue is to find the best threshold values for the simplification algorithm. Excessively aggressive automatic removal of nodes leads to losing important details of certain polygons. Typically it can be expected that up to 50% of import data set nodes can be removed without losing much in quality of details.

It seems that an extra pass with v.generalize douglas threshold = 0.00005 does a good enough job without chewing too much of details. It does, however, chew some important details, especially of bigger polygons (such as those at a tile border), and also fails to clean up segments that are shared between several ways. Because of the last issue, manual phases of detecting and smoothing remaining angles with 90-degrees and close pairs of nodes that are strictly horisontal or vertical were necessary to implement to clean up suspicious geometry patterns left after vectorization, smoothing and simplifying phases.

The same applies to making decisions of which features to keep. It was common to get many small patches of grass along highways that face large forests from machine-traced data. A human would have ignored these patches and drew a single line between a forest and a highway.