This post continues where the previous one left off.

After some time spent on processing and importing land cover data, I have several ideas on how to further improve and streamline both the import process and in general work with land cover features in JOSM.

Certain typical tasks arise over and over again when one works with polygons meant to represent land cover, regardless of whether they are imported or manually traced. At the moment there are no adequate tools in JOSM to assist with such tasks.

The trick here is not trying to find an exact geometric solution to the tasks at hand, but rather imitate what a human would reasonably do to finish such a task. And a human would cut corners, allow some inexactness traded in for speed of completion.

A common task is to fill a gap between two or several polygons. An example would be to map a new farm field situated between several forests or clammed between several intersecting road segments. Currently one has to carefully trace a new way along the existing borders, either reusing nodes or leaving a small gap between the new ways and adjacent ones.

The idea here is similar to pouring a bucket of paint into the middle of the empty area and then letting it spread out naturally to fill the empty area. The paint will then spread out until it hits borders, or until it runs out of paint.

The same approach can be implemented in a tool that starts from a single node (or rather, from a tiny closed way) which then grows in all directions. Its growth is stopped when a segment of the new way hits a boundary in a form of an existing way. Optionally, the new way can then snap to existing way there.

There are many situations when splitting a closed way that either intersects itself or overlaps with another one makes sense. Possible uses of such functionality include:

Another useful addition is to clean up zero angles in polygons, identically to what tool=rmsa does. These are always artifacts not worth keeping and as such it should be possible to remove them.

Having nice common borders between land cover features without any under- or overshoot is a hard task requiring a lot of manual labor.

To drag or replace nodes to make a common border is called “snapping” them to new place.

Current embedded JOSM-tools (“N” and “J” buttons) lack configurability and cannot be used at scale, although they are very useful to patch something up.

The main problem with snapping is that it can destroy geometry quite significantly if done without measure.

To make decisions which nodes to move and which to keep, a threshold distance value is used. However, the nodes to be snapped are usually already organized in ways, and preserving sanity in these ways after some of their nodes have been moved is a huge task.

There are often two situations/issues: 1) to snap a node when there are multiple alternatives within a threshold distance, and 2) in which order to snap several nodes already placed on a way.

If several nodes from the same source way are snapped to different ways in its vicinity, the result is often a mess of self-intersecting ways.

Even if the same target way to snap is chosen for several nodes, if the order in which they are included into it is wrong, the result has zero-angled segments and annoying overlappings with destination ways within a narrow threshold area around them.

What I think is needed is to think about the problem as an optimization task. An algorithm may iterate over small movements of individual source nodes which are moved according to “the force field” or “a potential” function defined by positions of destination ways. Source nodes which are far enough from destination segments do not experience any incentive to move around and are mostly still. Nodes closer to the threshold distance are attracted to destination ways, and eventually get placed on them. To prevent nodes becoming in a wrong order only one node per step is allowed to be included into a destination way, which can only be done unambiguously. In next iterations that node is treated as if it always was there, and incoming snapped nodes are ordered automatically correctly relative to it (XXX is it true? can I prove it? are there couterexamples to that?)

As it was pointed out earlier, we are not looking for a 100% correct solution but for a one that is good enough without being too destructive. The bad part is that this algorithm is more complex than simple snapping that could be done in linear time. A number of iterations to achieve a stable result may be hard to guess in each case.

Scanaerial [2] is a tool to help with tracing of aerial images. It is espacially effective for water surfaces (as they have simpler textures than e.g. forests).

The problem is, it is an external program written in Python. Amongst many problems that this brings are: less than possible speed, no progress indication, awkward configuration of aerial imagery to use.

Inclusion of the same functionality into JOSM directly as a Java plugin would allow the tool to have a better interface and provide smoother user experience. It could use all imagery that is present as JOSM layers.

Another improvement is that it could be improved to stop at boundaries where there are already traced objects, by e.g. using them as a mask for raster. That would save a lot of time conflating results of tracing into the whole picture.

Not yet solved problems of traced data quality

This section discusses not yet solved problems in the import data I’ve worked with. It was required to manually edit their consequences, which was the limiting factor for import. Thus they are very much welcome to be solved mechanically whenever it is possible.

Compare the following two pictures. Before cleaning import forests along a road:

After manual cleaning of nodes. 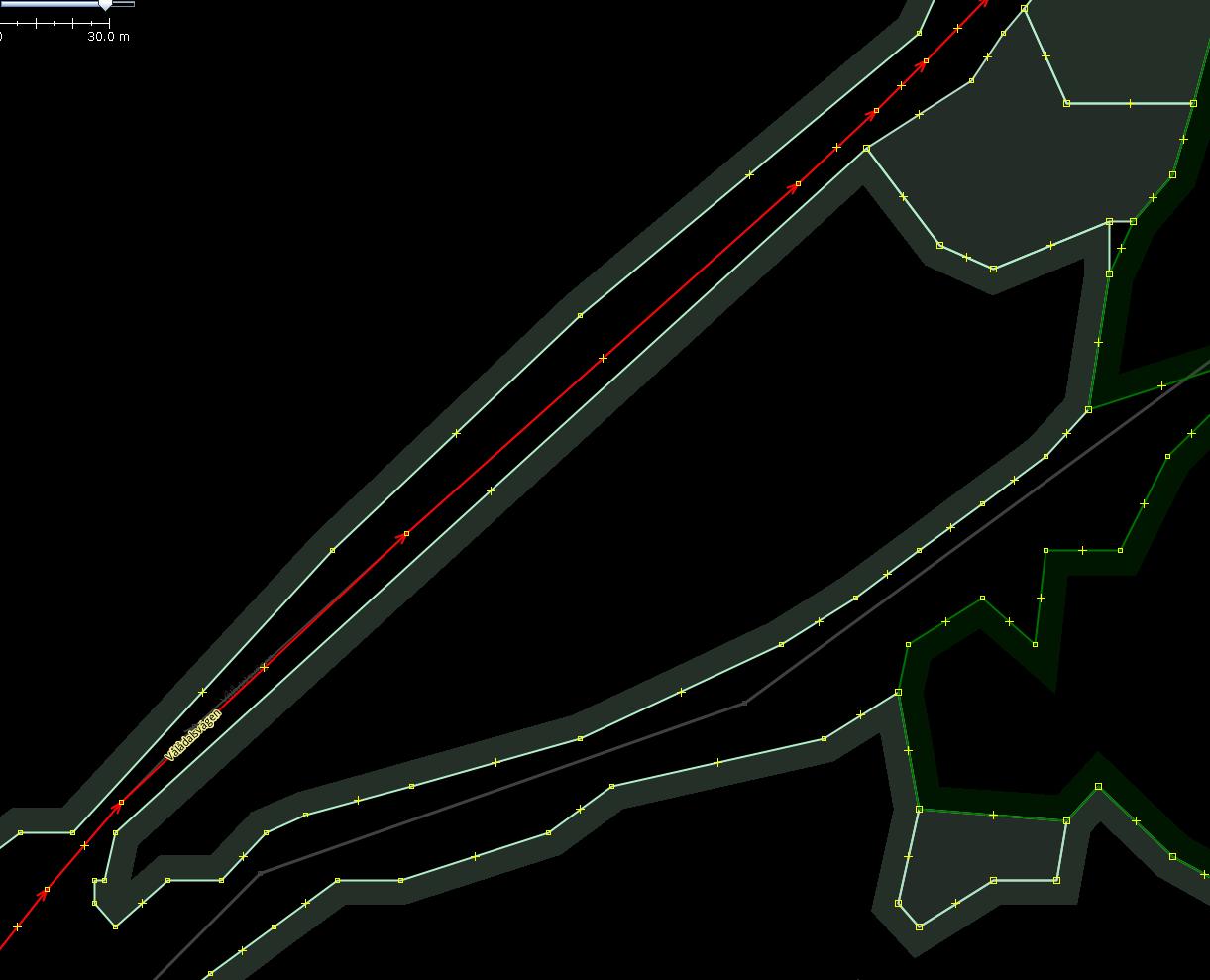 Usually humans find the second variant to be preferable as it has less nodes and less clutter.

The task is almost equivalent to snapping nodes to an “invisible” buffer polygon created around the road. If all source nodes are placed on the buffer boundary, resulting forest borders would be parallel to the road in the middle.

A road can run through a massive of a forest, farmyard or similar land cover. Alternatively, it can be placed completely outside of any land cover, effectively cutting it in halves. The road then has its own “channel” in which it runs.

The worst case is when one has a mixture of these strategies. A road that runs outside the forest but then jumping into a short chunk of it and then emerging back from it is confusing. See the picture for explanation. 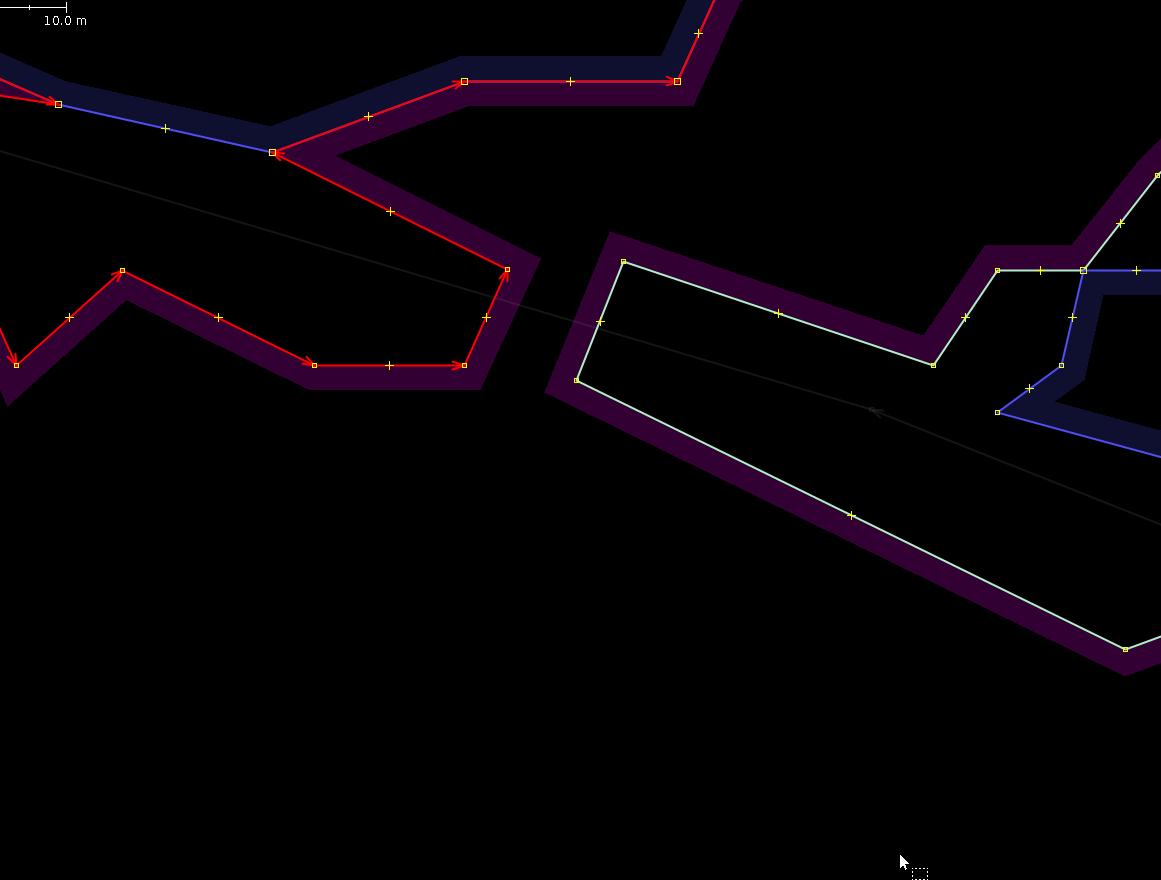 Here, outer and inner ways of the surrounding multipolygon create “almost” a channel for the road. To properly remove the “plug” in this channel requires a huge amount of work: to split the outer way in two, to split the inner way in two and change its role to outer, then sew matching parts of these halves to obtain two outer ways placed on both sides of the road.

Deciding what to do with old data of lower resolution

This is kind of self-explanatory.

As we get more and more highly detailed aerial pictures and more and more advanced remote sensing and tracing software, it is often obvious during an import when existing data is of lower resolution than the data that could have been imported in its place instead. But, to play it safe, the old data is considered to be “golden”, and new fine features get mangled at borders that contact old coarse features.

In the case of lakes, many of them were present on the map, but badly traced. If we were to import lakes as well, it would be preferrable to replace those old ones with coarse boundaries with new ones. But how to reliably decide?

Is it possible to measure resolution of vector objects? 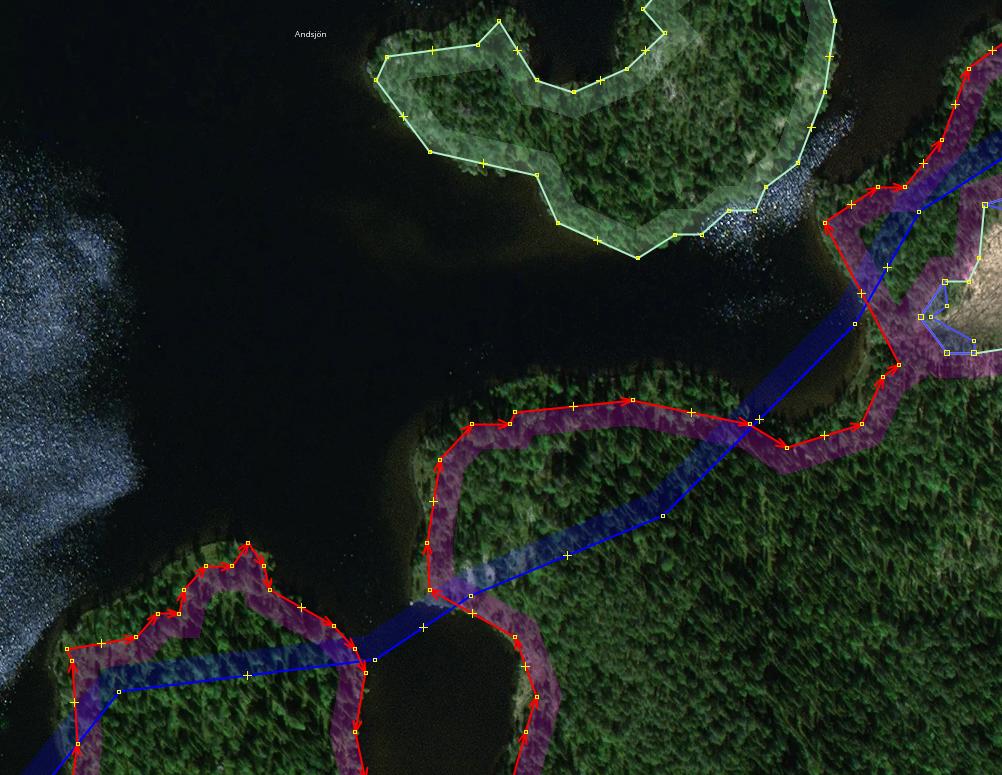 A few notes to self to try before importing the next huge chunk of data. Or, to do as a completely separate imports.